How do you create your feelings? 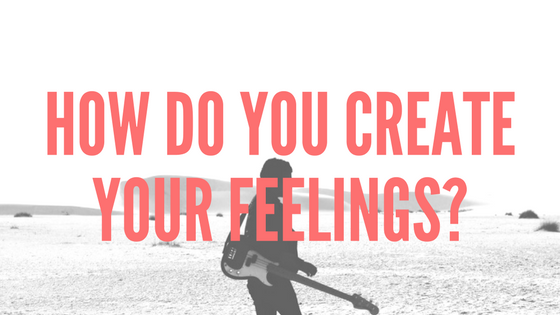 Have you ever gone to traditional therapy? I’m talking about a therapist that is trained in traditional behavior change, without and current or new modalities to pull from.

When I was 15 I went through a rather difficult phase in life.

Well, I should be more clear. My 15 was particularly difficult for my parents. I was having a blast!  🙂

Anyway, I was really testing my limits, hanging out with friends, and starting to get into trouble. I was staying out later than I had previously, was making new friends, and closing myself off from my parents.

I wasn’t mad at them. They hadn’t really done anything wrong. I was just figuring out where they stopped and I began.

A process that was interesting for me.

And apparently concerning for them.

After about 6 months of my testing my limits they decided to put me in therapy. They wanted someone to get through to me and figure out why I was acting the way that I was.

They first sent me to the counselor my mom and stepdad were going to. (It seems having a difficult teenager can be challenging for parents) She was helping them determine the best way to handle me, and one of her ideas was to have me come to her.

That went well at first. I liked her, she was nice. I still remember the warm feeling I got when I went to her office.

That relationship lasted about 4 sessions until she shared some things I had said with my parents during one of their sessions. When I confronted her about it she apologized, saying it was inappropriate and wouldn’t happen again.

I didn’t go back.

Then they found a gentleman for me to go see. He was in his 50’s, soft spoken with a very quiet demeanor. He was fairly passive and really seemed to want me to lead our time together.

Then he brought out the pictures and started asking me what I saw in them.

Unfortunately for him he caught me on a bad day. I decided I was going to test him, so I told him every picture reminded me of some horrible, violent thing. Suicide. Losing a child. Murderous thoughts.

I was awful to him. I know that now.

In any case, after my session I walked downstairs and got in my parents’ car and told them to expect a call from him.

When they asked why I told them that he was going to say I was suicidal.

My mom rolled her eyes, told me I was being dramatic and drove me home.

About two hours later she knocked on my door and told me the counselor had just called with grave concerns that I had suicidal tendencies.

Needless to say, I didn’t go back to him.

In retrospect I feel bad about what I did to him. I was angry and resented having to go to therapy for what I thought was acting normal.

I resented being asked why I was acting the way I was.

I got tired of being asked why I wouldn’t change.

If I knew all of those answers, I wouldn’t be going to him. Right?!

This is all a very long winded example of the kind of therapy I’m referring to. The therapy that focuses on the why.

The issue with asking “why” questions is that it keeps people locked in the problem. It doesn’t allow a focus on the solution, instead keeping the energy focused on the source of the problem.

[bctt tweet=”The issue with asking “why” questions is that it keeps people locked in the problem. ” username=”tracyhoobyar”]

One of the things I love about NLP is its focus on the how.

These are fascinating questions. They are questions that are puzzles to solve, questions to figure out and identify solutions to.

NLP focuses on how we produce feelings and actions, allowing us to identify how to create different ones.

[bctt tweet=”NLP focuses on how we produce feelings and actions, allowing us to identify how to create different ones.” username=”tracyhoobyar”]

By noticing how we create a particular feeling we can then notice where we need to make a change in order to create a different feeling.

So, let’s try something.

Think of a feeling you have that you’d like to change. Think of a time you felt that feeling. Allow yourself to notice what happens. Slow things down in your mind.

Notice each moment of the experience. What happens in the moments leading up to you having that feeling? What do you notice as you begin to experience that feeling?

Often times, when you are able to slow things down enough, you will notice something you may not have consciously noticed the first time.

You see, our minds are insanely efficient. They can do and accomplish things so quickly we don’t even notice we are doing it.

And the more often we do it, the faster we can do it.

It’s quite amazing if you think about it. In fact, as you went through the exercise you likely discovered multiple steps your mind went through in order to create the feeling you were exploring.

Here is the question. Now that you are aware of what happens leading up to your feeling, what would happen if you made one small shift? What if the smallest moments leading up to that feeling were slightly different? A voice a bit softer? A feeling a bit warmer?

It is in these moments, these shifts, that true change can occur. And it is only through the how, rather than the why, that we can identify these moments. 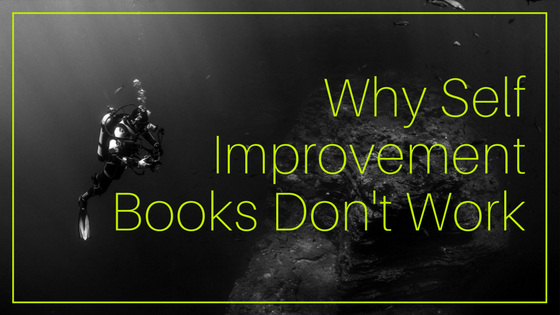 Why Self Improvement Books Don’t Work

Why Self Improvement Books Don’t Work